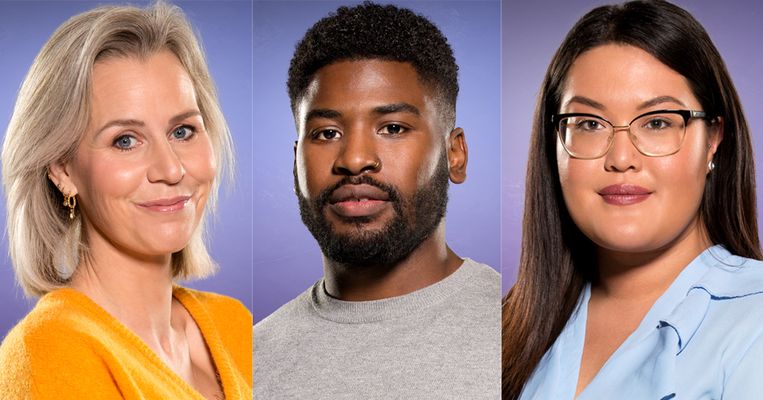 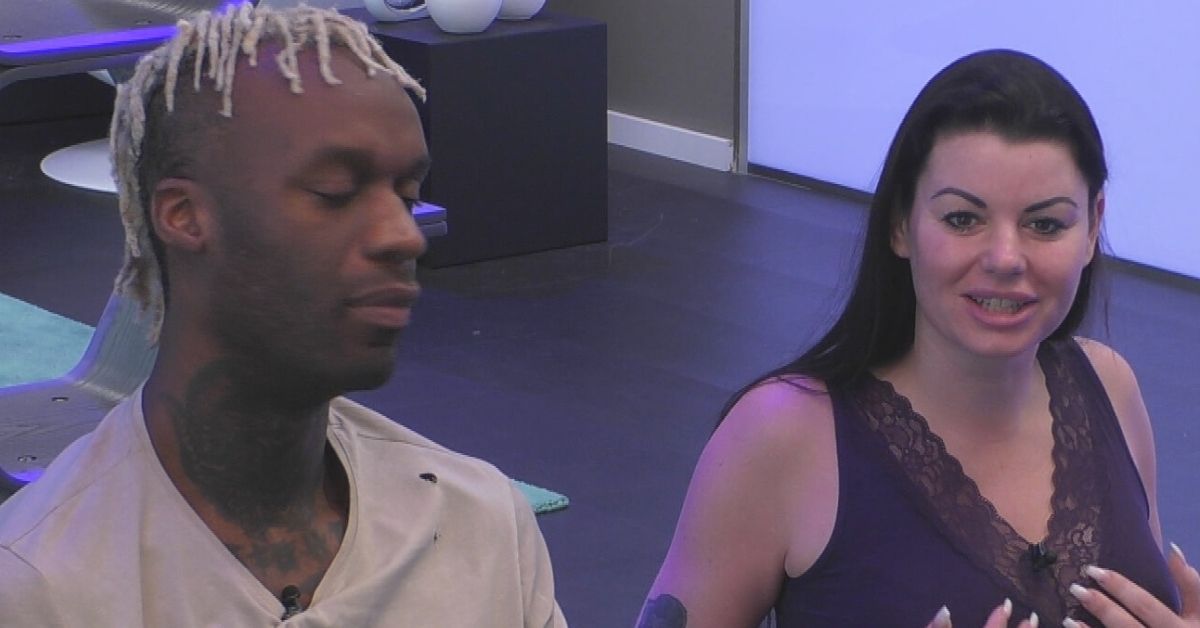 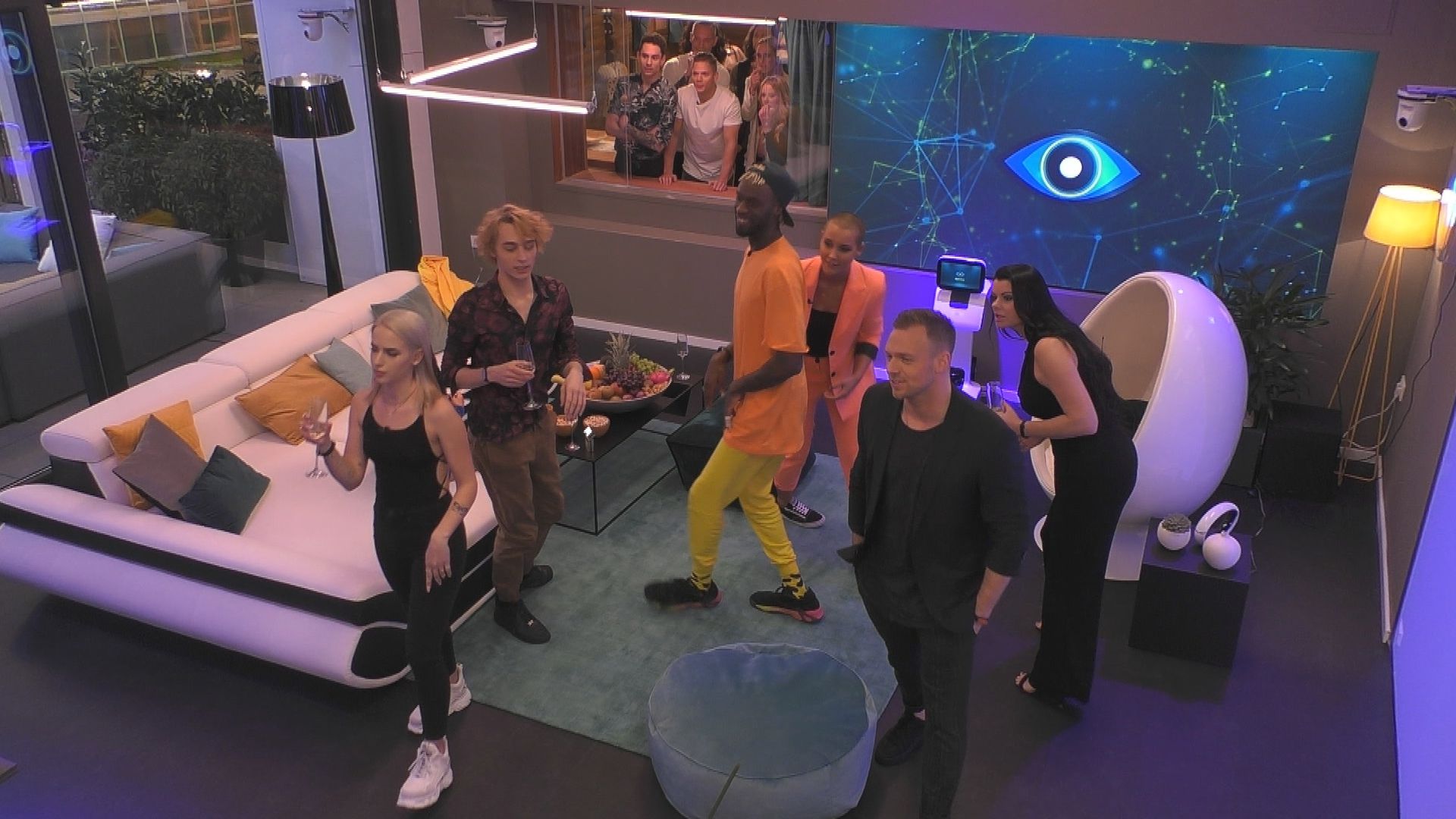 For the first Head of Household competition, Dick, Dustin, and Jessica were unable to compete, and were thus immune from the first eviction.

This season also saw a Double Eviction week occur, making it the second season to feature this twist.

On Day 1, Dick, Dustin, and Jessica entered the house through the Head of Household room before the others arrived.

Shortly after entering the house, the HouseGuests learn that the three are in the house before going outside to compete in their first Head of Household competition.

Due to the uneven number of players, Nick chose to sit out. One HouseGuest, the "sitter", was required to answer questions while their partner spun on an over-sized mushroom.

When the sitter answered incorrectly, their partner's mushroom began spinning faster. The three upstairs then learned that they were given the option of selecting the first Head of Household; they chose Kail.

The competition resulted in Daniele, Eric, Jameka, Jessica, Joe, Nick, and Zach being on slop for the week.

Kail later formed an alliance with HouseGuests Mike, Nick, and Zach, which was commonly referred to as the "Mrs.

Robinson Alliance". On Day 7, HouseGuests competed in the "Hide and Seek Veto" Power of Veto competition. Once everyone had hid their boxes, they would attempt to find the boxes one at a time.

When a HouseGuest found a box, they would bring it outside and that HouseGuest was eliminated from the competition; the winner would be the HouseGuest whose box was not found.

This led to numerous HouseGuests hoping that Daniele would use the Power of Veto to allow Jen to be nominated.

Following Carol's eviction, HouseGuests competed in the "Majority Rules" Head of Household competition. The object was not to base the answer on personal opinions, but how they thought the majority would answer.

The competition resulted in Amber, Daniele, Jameka, Jessica, Joe, and Kail being on slop for the week. Shortly before the competition, Jen made numerous statements to upset Amber, which led to numerous arguments in the house.

Daniele was the winner of the Power of Veto for the second consecutive time. Robinson" alliance. Following Joe's eviction, the HouseGuests competed in the "Getting Schooled" Head of Household competition.

Providing an incorrect answer resulted in a HouseGuests elimination; the last HouseGuest remaining was the winner. The pairs had match up a specific "meatball" from tub A and tub B.

When the two HouseGuests matched their meatballs, they won that food for the week. When the time ran out, the House would win any food collected in the competition.

On Day 22, HouseGuests competed in the "Mad Hatter" Power of Veto competition. The last HouseGuest remaining who had not dropped their cup would be the winner.

Following Mike's eviction, HouseGuests competed in the "Eliminator" Head of Household competition. If a HouseGuest answered correctly, they were able to eliminate one HouseGuest from the competition; an incorrect answer resulted in that HouseGuest being eliminated.

The first team that successfully completed their puzzle would not only win food, but put five people on slop.

Jameka and Jessica were the winners; they chose to put Dick, Jen, Kail, Nick, and Zach on slop for the week. Due to her religious beliefs, Jameka stated she would take Jen off the block should she win the Power of Veto as Jen had selected her name to compete.

Following Nick's eviction, HouseGuests competed in the "Times Up" endurance Head of Household competition. HouseGuests were also eliminated if their torso was raised above a bar located on the pendulum.

On Day 36, HouseGuests competed in "The Numbers Don't Lie" Power of Veto competition. If a player had the lowest hours, they would be eliminated; putting the highest number resulted in elimination.

Jen was the winner of the Power of Veto. Following Kail's eviction, HouseGuests competed in the "Let's Make a Duel" Head of Household competition.

On Day 43, HouseGuests competed in the "Shot For Shot" Power of Veto competition. The HouseGuests then attempted to get the highest score in a game of croquet, and the HouseGuest with the most points was the winner.

Following Dustin's eviction, HouseGuests competed in the "Strange Visitors" Head of Household competition. The HouseGuests had to throw volleyballs across the backyard in an attempt to score ten points; the first team to do so would be the winners.

The team of Amber, Daniele, Jameka, and Jen lost the competition, and were placed on slop for the week.

Before competing, the HouseGuests learned that the finalists in the competition would receive a special trip outside of the house. Big Brother - Folge Rausgewählt!

The Party uses the image of Big Brother to instill a sense of loyalty and fear in the populace. Big Brother is merely a convenience that suits the current goals of the Party.

Season 8. Series eight logo. Essex originally from Nigeria. Walked [c]. On Day 2 the housemates were given a breakdancing task, they were split into two crews and competed against each other.

The podcast is a weekly task taking place on Fridays and is available for download on the Channel 4 website. On Day 10 Carole hosted the weekly podcast.

On Day 6, Shabnam was punished for discussing nominations, and Big Brother made the bathroom off-limits to all housemates. They chose Shabnam.

As a result, Shabnam's clothes, make-up, and belongings were confiscated by Big Brother. Emily was ejected on Day 9.

Big Brother gave the housemates a charades task with a twist of having to play it under water. As a prize for completing the task successfully, housemates were rewarded with a chinese take away meal.

Hidden in a small sardine tin in the garden was the magic number, four hours and 20 minutes, this was the time limited Big Brother had set for the housemates to remain in the tin in order to win the task.

On the bottom of each pie, there was a conversation topic, and all housemates had to contribute to the discussions.

Afterwards, all housemates had to nominate one person to put up a set of shelves in the Diary Room without instructions. On Day 14, due to Gerry and other housemates discussing nominations, Big Brother took away the house's bathroom privileges.

On Day 25, the housemates had a Knobbly Knees Contest, in which Brian and Charley won. Their prize was a holiday in the Big Brother caravan.

They completed this task successfully, and earned an extra hour on the sleep clock. For discussing nominations with other housemates, both Billi and Charley's nominations were cancelled.

Four or more housemates must pass this task to receive a luxury shopping budget. All but Charley passed. As a reward, The contestants were given a party with a chocolate fountain, alcohol and "Seven Sin costumes" while Charley sat in the Sin Bin watching them and missing the party.

Gerry, Brian, Chanelle, Carole and Sam conducted the weekly podcast. Jonathan left voluntarily on Day Unbeknownst to the housemates, their task this week was to discover that their new housemate Pauline was really British actress Thaila Zucchi.

They were successful, and received a luxury shopping budget. The weekly podcast was conducted by Charley and Nicky.

As part of fake week, the housemates were punished for crimes they did not commit. However, the eviction was actually fake as a climax to "fake week" and Charley was interviewed and then put back into the House.

Housemates had to have a party for Big Brother's birthday, where five housemates partied, and the remaining six provided the entertainment.

They had to party until Big Brother told them to stop. Nicky had a personal task to perform a stand-up routine to win the housemates a takeaway [83] and Gerry had to answer questions to win alcohol to go with the takeaway.

For discussing nominations, Chanelle and Ziggy were restricted to only one nomination each. Nicky was evicted on Day On Day 53, the housemates were given the task of answering philosophical questions.

Amy, Jonty, Shanessa, David and Kara entered the " Halfway House " on Day Charley was evicted on Day On Day 63, the halfway housemates had to sit in boxes and jump out at The housemate who jumped the nearest to the time would be moved to the main house, and would need to pick a housemate to move to the halfway house.

Shanessa won. Kara and David moved into the main house on Day 62, after they were chosen by the current Housemates. The Housemates then had to choose one of themselves to move to the Halfway House, to which Ziggy said he wanted to go.

She chose Liam. Amy, Jonty, Liam and Ziggy moved back into the house on Day 64, [98] in exchange for David, Kara, Shanessa and Tracey.